In 2018 and 2019, Shropshire Wildlife Trust (SWT) and SOS established a long-term County-wide ‘Save Our Curlews’ campaign, funded by a joint appeal. SWT withdrew in 2019. The Campaign and Appeal have been continued and co-ordinated by SOS.

Information about the discontinued SWT / SOS joint appeal has now been archived, and is available here.

The Campaign and Appeal will build on project work carried out in 2018 and 2019 with the Upper Clun and Clee Hill Community Wildlife Groups.

The full reports (.pdf format) of project work in 2018 in these areas can be found by following these links:

A summary of the project work, and the monitoring by the CWGs, in 2018, can be found here, in MS Word format (.docx).

The 10 CWGs covered 137 of Shropshire’s 870 tetrads, and over 270 people contributed over 2,200 hours to the surveys, a clear indication of the commitment of local people to saving our Curlews. Between them, the Groups found 80-100 territories. A summary can be found here.

These projects continued in 2019, but less time was spent on nest-finding, protection and monitoring because the SWT / SOS appeal was less successful.

It was a strange year, as Curlews arrived back on their breeding grounds, and settled down, later than usual.

In the Upper Clun, 6-10 pairs were found, the lowest since monitoring started in 2007, but some pairs did not appear to settle down at all, although they might have done but been predated quickly. One nest was found, the territory with the pair that hatched deformed chicks last year, but permission could not be obtained to fence it (there was no current owner – the owner was deceased, and the legacy was in probate), and the nest was predated. Therefore, no fencing of nests or ringing or radio-tagging of chicks was been done in that area. Two nests, possibly three, produced chicks, but it is believed that none survived.

In Clee Hill, the Community Wildlife Group found 7 – 8 pairs in the area that has been monitored since 2012, and another one just to the north. Four nests were found and fenced. One clutch of 4 eggs went full term, but didn’t hatch, and another clutch was destroyed after sheep with thick coats (which protected them from the fence) were released in the field and trampled part of the fence down. 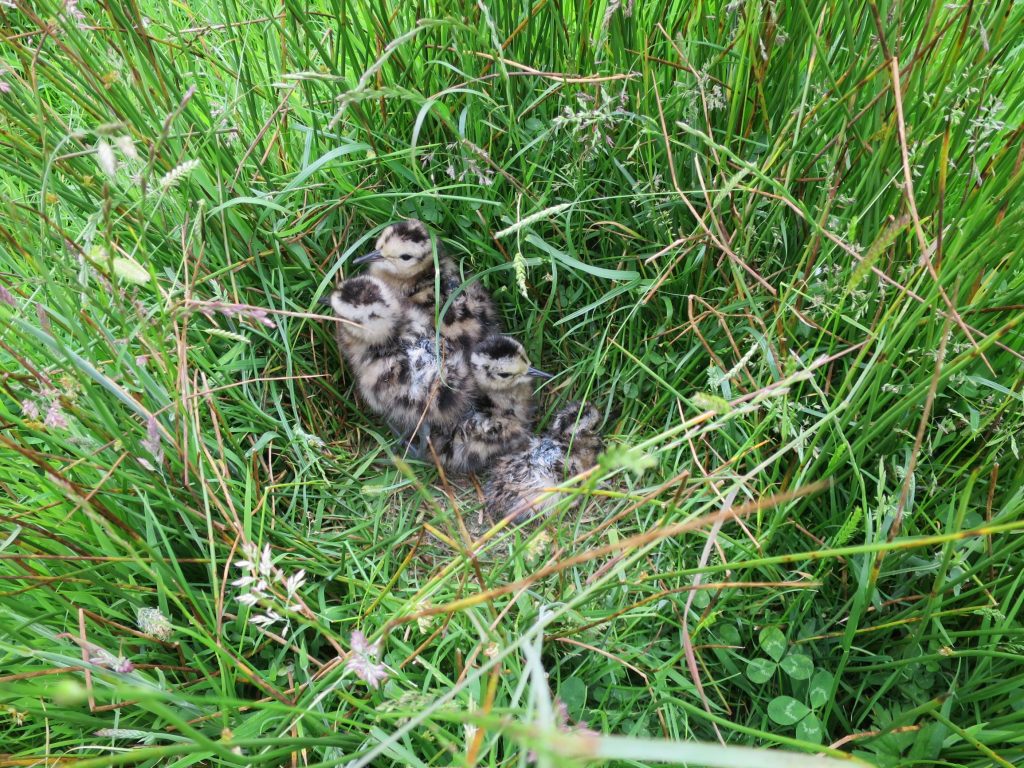 Two clutches hatched. Radio tags were fitted to six chicks, and they were tracked.

The first pair, on SWT land at Catherton Common, are presumably the pair that used the tree nursery in previous years, as they took the chicks near to it after hatching. Three of the 4 chicks were tagged. Two were predated. The third lost its tag, which was found, but it appears this too was predated.

The second pair (at the same site where definitely one, probably two, young fledged last year) had three eggs that all hatched, and all the chicks were tagged and tracked. All three young were colour-ringed and fledged – an excellent result.

Another nest, in a cereal crop which made it unfindable, definitely produced chicks, but they were not re-sighted. No evidence was found that any other nests produced chicks.

The main aim of the Clun and Clee projects in 2019 was to gain more information about how the chicks behave and forage, and the threats they face, and we have achieved this on Clee Hill.

One of the six chicks headstarted and released by Curlew Country in 2017 returned to the area this year, and nested. That project had support from WWT for headstarting in 2019, and has posted a blog about the successful release of 33 headstarted chicks in south Shropshire (see http://curlewcountry.org/2019/08/02/the-big-release/)

This excellent effort demonstrates the commitment of local people to saving the Curlew from local extinction.

The SOS Appeal, grants promised by other bodies, and a substantial contribution from SOS’s own funds raised most of what was needed to fund project work in three Community Wildlife Group (CWG) areas in 2020. This would have involved finding and protecting nests, followed by radio-tagging and tracking chicks to find out what happens to them. However, the planned work and fundraising for the shortfall was postponed until 2021 because of the coronavirus lockdown. All the money raised, including grants approved by other bodies (£5,000 from People’s Postcode Lottery through the National Trust’s Stepping Stones Project to fund project work in the Strettons area, £2,000 from the Shropshire Hills AONB Conservation Fund and £1,000 from the Garreg Llwyd Hill Wind Farm Community Benefit Fund for work in the Bettws-y-Crwyn part of the Upper Clun area), has been carried forward, and fundraising will restart in the autumn, so the complete project can be started in 2021.

The CWG Bird Surveys were also cancelled until coronavirus restrictions were eased in mid-May, but the planned population monitoring of the vast majority of the County’s estimated population of 120 breeding pairs by 10 different CWGs continued within lockdown restrictions. See the Curlew Survey Results 2020 here.

A full report on the bird survey results for each CWG in 2020 can be found on the respective sections of the website www.ShropsCWGs.org.uk