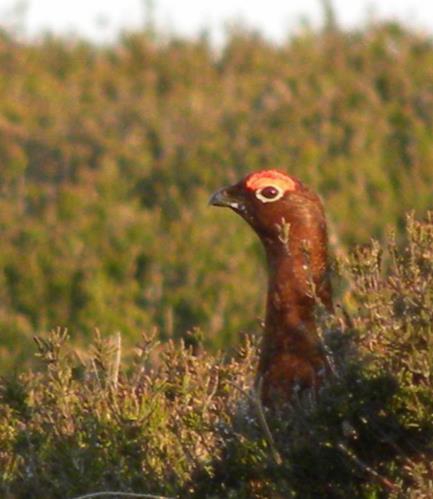 Since 2011, the Red Grouse population on the Long Mynd has been counted by the co-ordinated efforts of volunteers at dusk on several evenings between late March and early May. Volunteers have included participants on the SOS-NT bird-watching courses, members of the local SOS, SWT and RSPB groups, National Trust volunteers, members of the Strettons Area Community Wildlife Group, and other people interested in birds. Last year there was no count because of the COVID-19 lockdown. In 2019, there were about 30 volunteers but a larger number is needed for a successful survey.

The Strettons Area Community Wildlife Group is leading the project. We want to recruit as many helpers as possible for the 2021 survey. It’s easy to do, and new participants will be very welcome. Counts will be held on seven successive Thursdays in April and early May. Additional dates will be arranged on other days of the week, so please sign up even if Thursdays are inconvenient. Participants do not need to come to every count. Please come to as many as you can.

Pairs are secretive in the breeding season, and stay in the deep heather, so they are difficult to count. However, territorial males display around sunset. Most territories are within sight and hearing distance of the road along the top, between the Gliding Station and the Shooting Box car park. The display flight is noisy, conspicuous and unmistakable, and can be observed over long distances, so this is a suitable project for anyone interested in birds or conservation. No special knowledge or skills are needed.

A full briefing, and training for anyone that wants it, will be provided. A number of Watch Points on or near the road are marked on large scale Ordnance Survey maps. Each participant will be allocated a Watch Point, and go to it around one and a half hours before sunset, and stay there until about 15 minutes after sunset. The location and activity of all  Grouse seen or heard will be marked on a map (recording instructions and a map will be provided). A population estimate can be made by collating all the observations.

The methodology is very straightforward, and will be explained in a survey briefing and reference to various websites. In addition, if you want you can have “on the job” training on the first survey date you can attend, rather than go to a Watch Point on your own. Subject to COVID-19 restrictions, we hope to return to a Briefing Meeting for new participants in 2002. 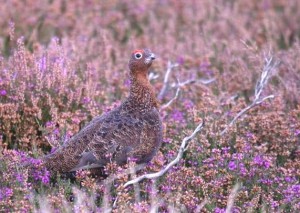 So we can plan, every participant will be asked to complete a form, indicating which of the count dates you can attend, watch-point preferences, and contact details. People who have helped before, and who did not attend the briefing, can follow these links to download the relevant documents:

You may also request these materials by email from Lorna Taylor.

It can get very cold or wet, so please bring plenty of warm and weatherproof clothing.

The Long Mynd holds most of the Shropshire population. Many years ago, numbers were considerably higher than they are now, but suffered a substantial decline. They now appear to be recovering as a result of the heather management carried out by the National Trust. This project helps the Trust assess the effectiveness of the management by providing annual population estimates, and a population trend. Therefore it is hoped to repeat the project each year.

Adding the result to The Stiperstones counts gives an estimate of the total Shropshire population.

The usual survey method involves mapping territorial displaying males on several dawn visits in spring, and analysing the comparative results (the “Territory Mapping Method”). The Long Mynd is a large area, and the National Trust had difficulty organising three dawn counts between December and February each year (poor weather, and not enough helpers). This project method produced better results than the previous NT dawn counts in 2011, so it has replaced them.

Bird Monitoring on the Long Mynd

The project will be part of the bird monitoring on the Long Mynd carried out for the National Trust as part of their Environmental Stewardship Higher Level Scheme Agreement with Natural England, which is co-ordinated by Leo Smith Ornithological Surveys and Consultancy.