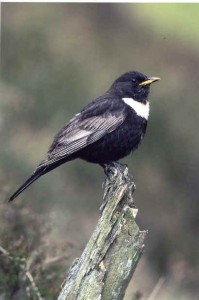 Ring Ouzels are mountain blackbirds which winter in southern Spain and the Atlas Mountains of Morocco. Most return to their breeding grounds in mid-April. Unfortunately the population is declining all over Britain, and the local decline has been catastrophic. As late as 1999 there were around a dozen pairs on the Long Mynd, but by 2003 only one breeding pair was found. In 2004 only a single male returned. No evidence of breeding has been found since.

Male Ring Ouzels are similar to common Blackbirds in shape and size, but they appear a bit more grey, and have a prominent white throat and upper breast, called a “gorget” (see photo). Females are browner, and usually have a much more dull gorget, but some of the females seen on the Long Mynd in recent years were very bright, and often mistaken for males.

Ring Ouzels usually nest on steep hillsides, broken by crags and scree. Most nests are built under heather bushes, and the birds feed on short grass. The Long Mynd held the whole of the known County population – the last confirmed breeding record from any other part of Shropshire came from the Stiperstones in 1982. The vast majority of breeding records came from Carding Mill Valley, Light Spout Hollow, Ashes Hollow, and Callow Hollow. A few came from Bilbatch, Wild Moor and the open moorland. Ring Ouzels are still seen regularly in March and April, on the Long Mynd, Clee Hills and Stiperstones, and occasionally in other places, but these are almost certainly passage migrants travelling through on their way to breeding grounds further north. 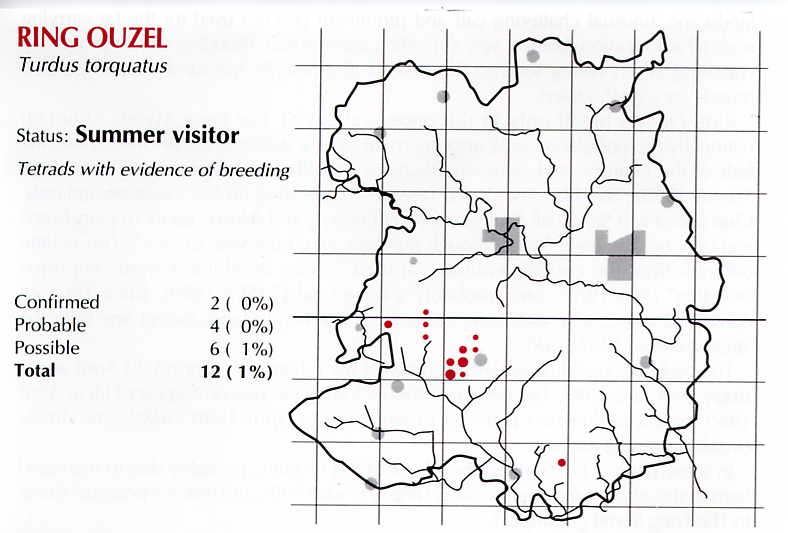 The distribution map to the right shows the range of breeding Ring Ouzels in the period 1985-1990s during fieldwork for the Atlas of Breeding Birds of Shropshire. The maps show only records for the months April – July, so passage birds seen in March are not shown. The equivalent map for the forthcoming Birds of Shropshire: an Avifauna (data from 2008 to 2013) shows no breeding evidence within the County.

Breeding pairs are very elusive – the males sing only sporadically – but they might be seen feeding together, either prior to egg laying at the end of April, or later in the season in the period between fledging the first brood and laying the next clutch. However, when the female is sitting on eggs, the male is usually quiet and well hidden, sitting in the middle of a tree or on the ground. When the pair is feeding young in the nest they forage up to 400 metres, occasionally more, mainly for worms and grubs. When the young fledge they are still dependent on the adults for food, and for these few days family parties are noisy and conspicuous.

The local population appeared to be isolated from any other. The male Ring Ouzels sang with a very strong local dialect, which was different from the species’ song in other parts of the country. 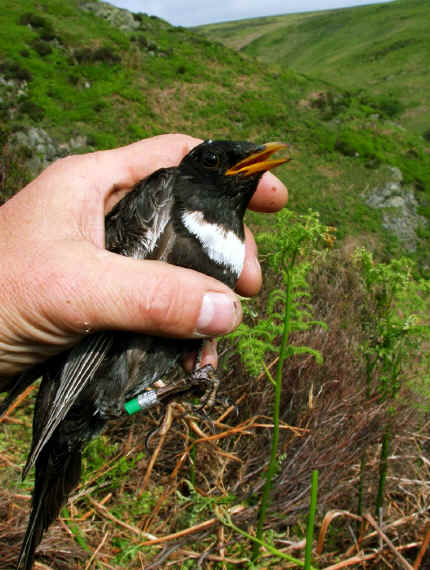 Colour-ringing of Ring Ouzels has been carried out locally since 1999. Each bird was given a unique combination, so they were known individually. Their loyalty to the Long Mynd, and their navigation skills, were amazing. One female was caught three years running at the top of Callow Hollow, and another female returned to Light Spout Hollow for four years running. In between each summer here, they undertook a round trip migration of 4000-6000 kilometres. This latter female was ringed as a chick in the nest in Ashes Hollow in 1996. She was seven years old in 2003, a ripe old age for such a bird. She must have flown well over 30,000 kilometres in her life.

Nationally, the population has suffered a steady decline throughout the 20th century, and a massive decline since 1990.  As a result, Ring Ouzel has been added to the latest version of the Red List of Birds of Conservation Concern. Several possible explanations have been suggested – environmental changes in the wintering areas (overgrazing by goats destroying the juniper forests which provide the berries that are the main winter food source, and/or agricultural intensification and irrigation which reduce available water adjacent to juniper forests); changes on the migration routes (shooting in France and Spain); a loss of heather through overgrazing in the British uplands; predation of nests; and global warming (perhaps by allowing an increase in the numbers of Blackbirds in the uplands). All have probably contributed to the national decline in varying degrees. No direct evidence has been produced to prove which are the most important factors at the national level, but in Shropshire the Long Mynd Breeding Bird Project has shown that predation of nests is almost certainly the dominant cause of the catastrophic local decline.

As Ring Ouzel is a target species in the Shropshire Biodiversity Action Plan, action to conserve it has been a high priority for the National Trust, which owns and manages the Long Mynd. However, there has been no apparent change in the quantity and quality of breeding habitat or food supply, and colour-ringing has shown that the rate of return of the previous year’s adults and fledglings was adequate to sustain the population, leaving  only predation of nests as the major explanation for the population crash. Loss of eggs or chicks to predators was found to be higher on the Long Mynd than in any other area in Britain where the species has been studied.

For example, only one pair was located in 2002. They built five nests, and eggs were laid in at least three of them, but they were all predated. No young at all fledged that year. 2003 was a bit better – again, there was only one pair, but they managed to fledge a brood of five. In 2004, one of this brood returned as an adult male, but no female was found.

The numbers of potential predators (crows, foxes and stoats) have all increased in recent years, and may have exceeded critical threshold levels since 1998.  This is attributed to a large increase in carrion in the Shropshire Hills, from intensive sheep farming and the release of large numbers of pheasants for shooting.

The Long Mynd Breeding Bird Project has produced an Annual Report on the study of Ring Ouzel since 1994. The 2004 draft Report summarises the contents of the earlier Reports, and details the evidence that predation is the major cause of the decline in the population of this species, and in that of several other ground-nesting birds.

To try and help this vulnerable species, the National Trust operated a nest protection scheme, and will do so again if breeding pairs are ever located in future. To work, the Project has to find any nests before the predators!! Readers can help by reporting immediately the location of any of these birds they see, in April, and right up until the end of July. Contact Leo Smith (tel. 01694 720 296 or by email to leo@leosmith.org.uk) or  the National Trust, through the office in Carding Mill Valley, or the Tea Room staff, or ring 01694 723068.