NOTE: a downloadable PDF version of this report is available here. 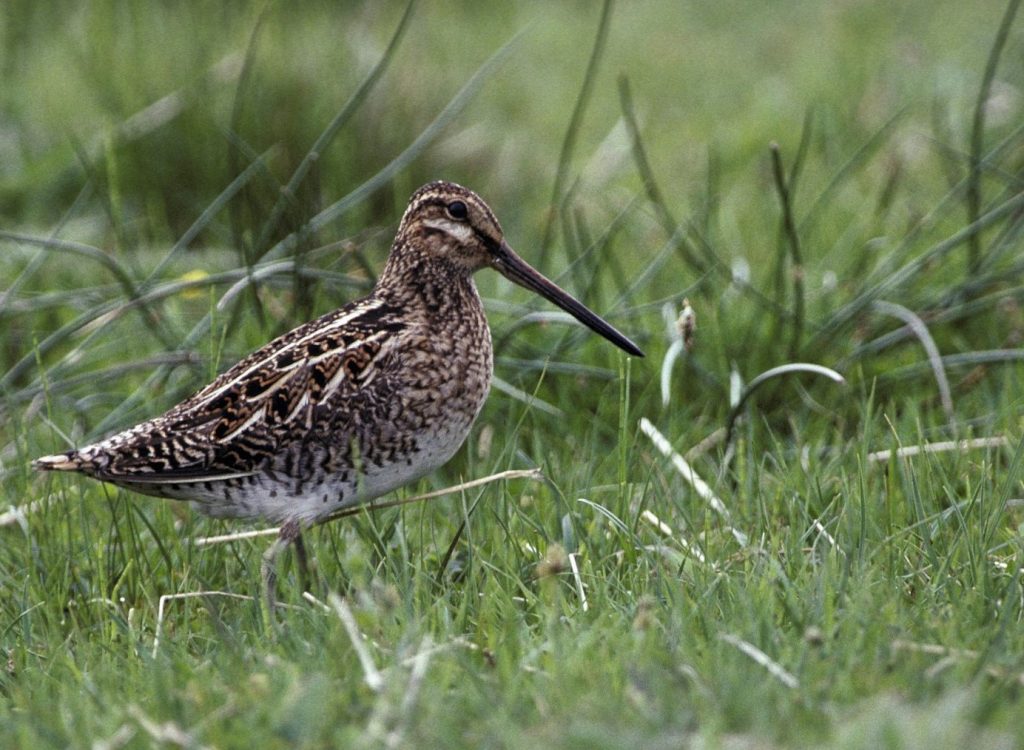 Snipe is a Shropshire Biodiversity Action Plan (BAP) species, and a survey has been carried out every five years since 2004 to monitor the population and distribution for the BAP.

The first survey was extensive, covering a large number of sites in the south-west hills which appeared to have potential for breeding Snipe. After an initial assessment of 49 sites, three survey visits were made to the 24 most likely sites, plus three where Snipe were known to have bred previously (Long Mynd, Stiperstones NNR, and Rhos Fiddle SWT reserve). A full report was published, together with a summary (Smith Shropshire Bird Report 2004).

The total population of the south-west hills was estimated at only 13 – 15 breeding pairs, with perhaps 20 – 25 pairs in the whole County. Recommendations were made to safeguard and improve the few remaining breeding sites, and improve the potential of other sites. The likely impact of an increase in potential predators as a result of the increased availability of sheep and Pheasant carrion for food was also discussed.

The vast majority of Snipe found during the first Survey were either drumming or chipping in deep twilight, at dusk, well after sunset. Some were flushed, but this required approaching within five metres. If densities are low, there is much less need for drumming to establish and defend territories. Initial monitoring on Wild Moor showed that, if the standard survey methodology had been used (three visits covering all parts of each site to within 100m, within three hours of dawn or dusk: O’Brien & Smith 1992), far fewer Snipe would have been recorded than the number actually found. All surveys were therefore carried out for at least an hour, usually two, ending in darkness an hour after sunset, and this timing has been repeated in each subsequent survey.

A more detailed study confirmed that “where only small areas need to be surveyed but absolute numbers are desirable, point counts at dusk will be the most effective method” (Hoodless et al 2010).

In 2009, all the sites where Snipe were found breeding in the 2004 survey, plus every site in the County with breeding season records since the year 2000 (The Stiperstones, where drumming and chipping were reported in 2007, Pen-yr-estyn, several sites around Newport, Whixall Moss, Wood Lane and Wall Farm), were covered.

The results for all years are shown in the table below. It will be seen that the observed population declined up until 2014. It has recovered slightly on The Long Mynd, where drumming Snipe were heard at seven places in 2019, usually accompanied by chipping. No Snipe were found at Stapeley Common, suggesting a further contraction of range. 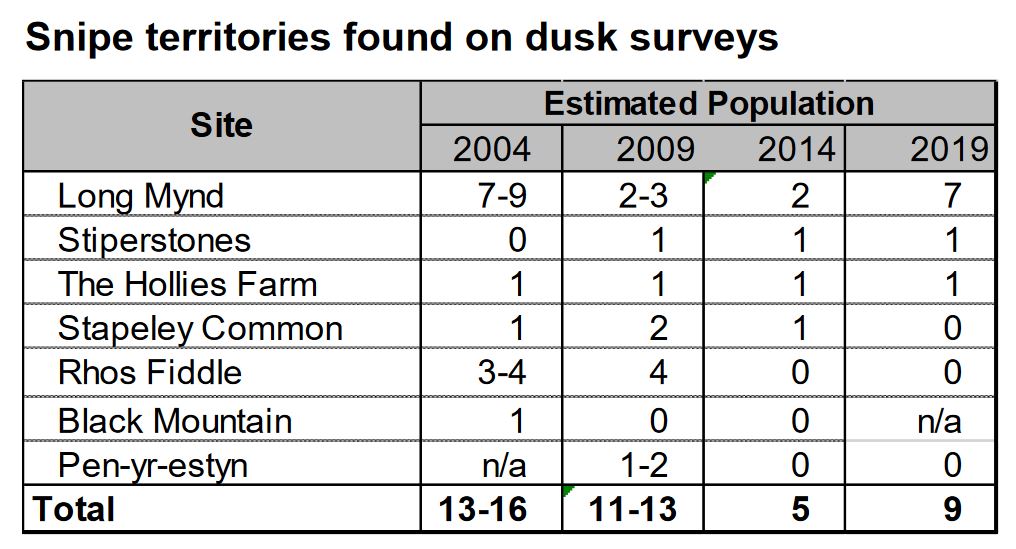 No Snipe were recorded in any year on visits to sites around Newport, although these sites received the same level of coverage as the sites in the table. However, there was a confirmed breeding record in May 2009, a nest with eggs found on a farm.

To reduce the risk of disturbance, grid references of sites with breeding Snipe are provided at 1-km square level in this public version of the report. More detailed grid references have been supplied to site managers and surveyors.

Whixall Moss was surveyed at dusk in 2009 and 2014, but no Snipe were heard. It was intended to survey this site again in 2019, but the arrangements fell through. However, following correspondence, records of drumming and chipping Snipe have been obtained from several local observers: Bob Harris (BH), Howard Prince (HP), Estelle Hughes (EH) and Steven Barlow (SB).

Breeding season records this year started with a single bird flushed in April, with two, possibly a pair, flushed from the same area in SJ4936 (in Shropshire) on the 4th and 17th May (BH).

The first drumming was heard at the same location on 15 May (SB), then drumming display flight was observed on 9 June 2019 (HP, EH), followed by an adult “chipping” in the same area on 7 July (HP). Between these latter two dates, dogs were walked regularly on that section of the moss, and chipping was heard on most visits (HP). In addition, another observer (SB) heard Snipe drumming in two areas about 300m apart on several occasions (dates not recorded), again in SJ4936. These two locations are sufficiently far apart for there to have been two territories, but if there had been two males so close together the resulting competition should have generated several observations of concurrent drumming, but such behaviour was not noted. It is therefore likely that one male was drumming over a large area.

There was a further record submitted to SOS via BirdTrack on 14 June, of a Snipe being seen, but only a 10km grid reference was given, and no information about behaviour. Following a query, the observer reported via BH that “one flew straight over my head drumming, heading towards section 9/11, then shortly afterwards a group of 4 circled around me, calling, and headed off in the same direction.” Although there is no direct evidence, it is possible that this was a family party (BTO website states average first egg date 1 May, incubation and fledging period 20 days each).

In previous years, Snipe were also heard drumming and chipping at the same locations in 2018 (SB), and in 2017 Snipe were heard chipping at a nearby site on a breeding bird survey (SB, EH and HP).

Confirmed breeding records are very rare from any site, but all the named observers consider that at least one pair bred in the Shropshire part of Whixall Moss in 2019, and probably in 2018 and 2017 as well.

Since Whixall Moss SSSI was acquired by Natural England in 1989, considerable work has been done to reverse the effects of commercial peat cutting and afforestation of the lowland raised bog, particularly by blocking drainage ditches and installing water control structures to reinstate the natural hydrological regime, and by removing conifer plantations. More extensive restoration works have been carried out since October 2016 through a five-year EU funded Marches Mosses BogLIFE Project, including the acquisition of surrounding more marginal land to convert it back to active raised bog habitat, further ditch blocking, and experimental works to improve the hydrology. These 2017-19 records of drumming and / or chipping are the first with evidence of breeding Snipe from Whixall Moss since 1995, and all the records have come from three areas that have been all been bunded to hold the water close to the surface as part of the restoration project. This has caused the creation of shallow pools within the bunded cells, ideal Snipe habitat. If these records herald a recolonisation of the Mosses by breeding Snipe, this will be a great achievement for the NNR improvement work, and an excellent result for BogLIFE.

The recovery on Long Mynd is also welcome, and is partly attributed to management work by National Trust since 2009 to cut and remove soft rush in early spring, thereby increasing the extent of soft wet ground in the vicinity of several previous Snipe breeding sites, particularly on Wild Moor. However, this population is still considerably less than the estimated 20-25 pairs in 1998 (Smith SBR 2003). A map of Long Mynd territories in 2019 has been supplied to the National Trust. The two territories on Wildmoor compare with 5-7 there in 2004, 1-2 in 2009 and two in 2014. Away from Wild Moor, three of the five sites occupied in 2019 that were not occupied in 2014 were first found to be occupied in 2017 (total 5 territories), and the other two in 2018. None of them were occupied in 2004, and were probably last occupied in 1998 or 1999.

The territory on The Stiperstones was at a different location from previous years. Since 2007, it has been centred on a bog between Cranberry Rock and the main car park (SO 3698). However, in 2019, no Snipe were found there, but one was drumming in part of the former Gatten Plantation (now known as Gatten Deadoaks) at SO 3798, where re-wetting management work has been carried out: rush cutting for some years, and ditch blocking. It is possible that the one pair moved to a less-disturbed location when the habitat had been improved sufficiently, but the sites are far enough apart (about 800m.) for both to be occupied, and the former site was occupied for many years. If it has not deteriorated, there is no reason why both sites should not be occupied. It is therefore recommended that the condition of the former site is assessed, and consideration is given to management works there, if there is any evidence of the site becoming drier, or encroached upon by rushes and / or bracken.

Conclusion
Including the Whixall Moss records, the estimated County population of Snipe in 2019 was 10 pairs, a very welcome doubling of the population since 2014.